The economy is in tailspin, destroying lives, jobs, and businesses.

The constitutional protections for America have been ignored by local and state politicians’ overreaching authority with restrictions and attacks on people of faith.

The loss of freedom in the name of security is destroying lives and creating new social problems.

There are 4 reasons we must turn things around and open up America again … now.

You won’t see or hear or watch this in the biased media. Pro-socialist politicians are saying maybe open back up in the summer… or fall… or next year.

But some states, counties, and cities are doing exactly that next week … and 12 states this coming week … maybe more.

We must restart the economy now. We have no choice.

Fact, Not Media and Politician-Driven Fear #1: The new “normal” demanded by some in the medical establishment, the socialist-oriented politicians, and the power-hungry bureaucrats is wrong and isn’t needed.

The quarantine and the home/shelter in place orders are unnecessary most everywhere in the U.S. And in states that have had a bad outbreak, most of the areas in those states are okay.

For example, 40 out of the 58 counties in California have been impacted … and fewer counties have a problem.

If the quarantine was needed at one time, it’s not needed in most places now.

If it was needed, it’s not worth the loss of freedom and criminalizing business owners, church goers, hikers, surfers and more.

If it was needed, it’s not worth the medical, social, and emotional destruction of 26 million unemployed, thousands of businesses closed down – and, in some industries such as restaurants, 80%will be in bankruptcy for good.

It’s not worth the pain, suffering, and stress.

It’s not worth it.

Fact, Not Media and Politician-Driven Fear #2: The facts say open now… and quickly.

As a small business owner, I can tell you the longer the economic restrictions go on, the more businesses will close forever, the more jobs will be lost forever, and the more economic damage will be done.

Yes, people have gotten terribly sick.  My prayers go out to them – it’s heartbreaking. Pastors, friends, businessmen and women, and supporters have gotten it.

My first copywriter I hired for my ad agency died from the virus. My prayers go out to all those who have suffered from the effects of the Chinese virus.

But the “experts” drove fear.

On March 13th, the CDC projections were:

In other words, we were doomed according to the socialists and the bureaucrats at the CDC.

The experts drove fear – they laid out the death projections that were not even close.

First, it was 2 million Americans would die. Panic.

Then, it was 1 million would die. Panic.

But remember, in the Spanish Flu pandemic of 1917-1918, approximately 675,000 Americans died … out of a total population of about 103 million — less than one-third the population of the U.S. today.

In fact, of the approximately 50,000 current coronavirus deaths in the U.S., many of those people had some other disease that would possibly kill them in 12 months or less.

It’s terrible, but not enough to destroy the economy and our freedom.

Look at the CDC figures for the top causes of death in 2017: 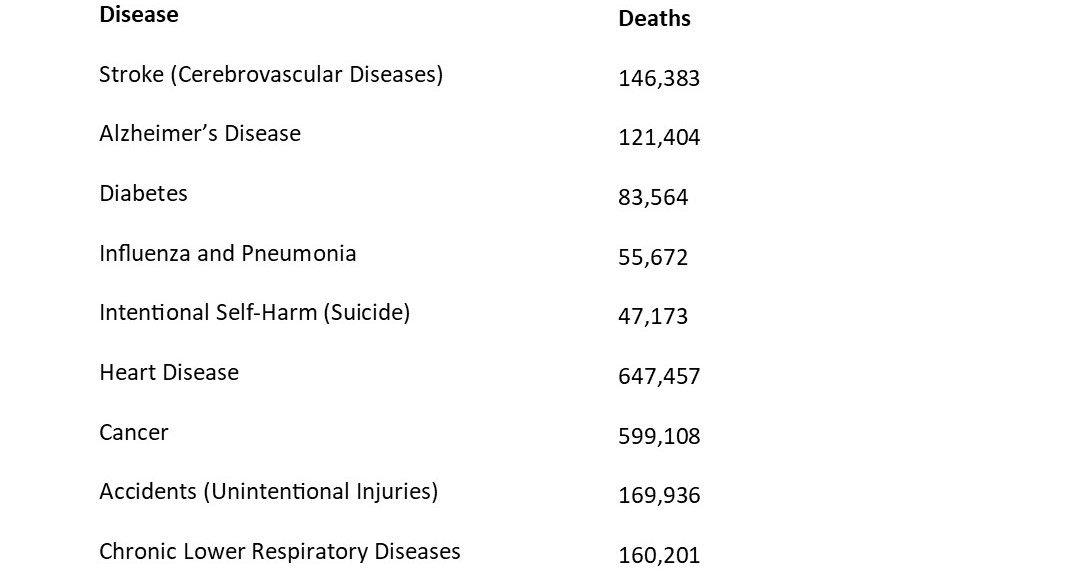 Note that just for heart disease, stroke and cancer, the 2017 U.S. death toll was almost 1.4 million!

We need to be cautious.

We need to avoid another surge.

We need to be wise.

But we don’t need to overreact.

Fact, Not Media and Politician-Driven Fear #3: The media, politicians, and more are attacking any voice questioning the authority.

The attacks on Christians have been outrageous:

The attacks on America has been what you’d see in a communist/socialist government:

In 1957 when I was in Elementary School, the Asian flu pandemic killed 116,000 Americans. The total U.S. population that year was about 172 million. Today it’s about 328 million. Proportionally there are a lot more Americans today, so the number has almost doubled by comparison of today’s population.

We did not shut down America.

We did not shut down freedom.

How many deaths actually took place? About 28,000. The bureaucrats and statists at the CDC who want to control people’s lives with their expertise and power have been wrong time and time again.

Every life is precious, and every death is a horrific tragedy, but life is filled with risks and calculations.

We even see it on an individual scale.

When you go to your own doctor you should get a second opinion.

It’s estimated that 51% or more of all diagnoses turn out to be incorrect once the second or third diagnosis is discovered.

The attacks on the anyone questioning the false statistics and media establishments have been vicious, unfair and wrong.

The media and politicians strike out against them.

These are Americans saying, let’s restart our economy and freedoms again.

Those who want to stay quarantined…let them.

Those who want to get back to work…let them.