Note: My wife Shelly wrote this critical update from her trip to Sacramento.

If you live outside California, this is coming to your state.
This is about the “Ban the Bible” bill AB 2943 that outlaws books, seminars and therapy for a fee on overcoming same sex attraction or gender confusion.
The bill passed the committee hearing – this special report includes Shelly’s observations every reader should hear. 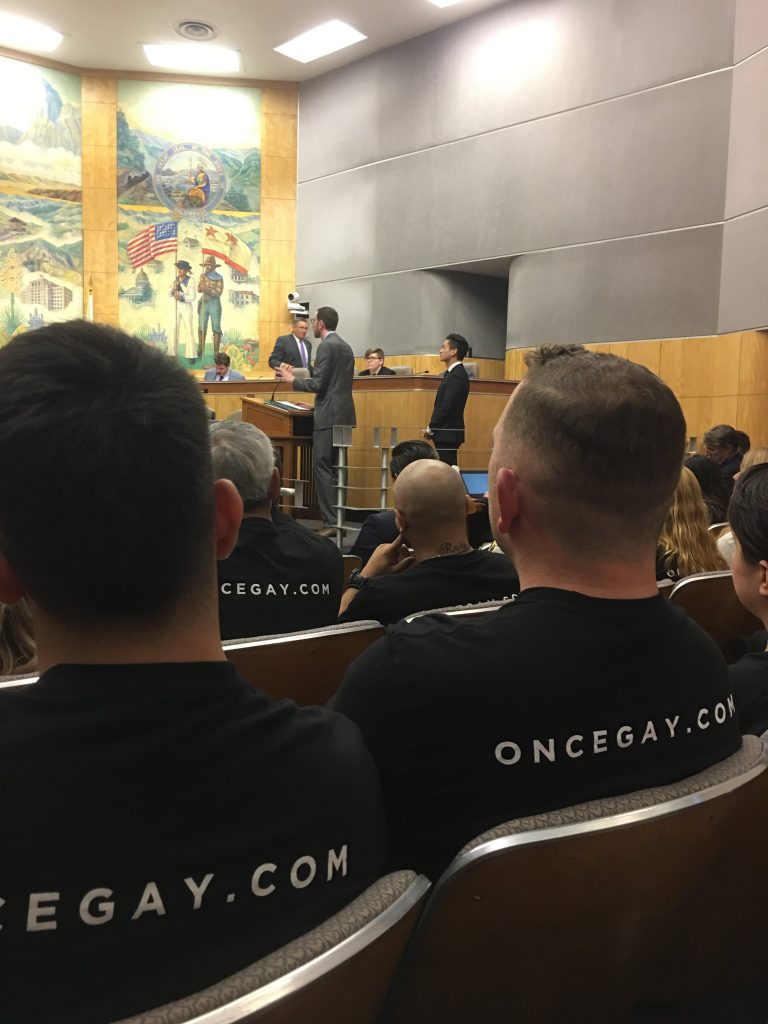 AB 2943 allows the government of CA to mandate that:

AB 2943 in and of itself:
Is a direct antithesis of hope.
It’s a direct affront on the supernatural work of the Holy Spirit.
It’s in direct violation of being set free.

The co-authors of the bill are gay. And the LGBTQ caucus supports them as well.

I listened to the hearing. I heard the testimonies. A constant stream of Christian after Christian (for over an hour) stated their names and where they were from, and that they opposed the bill.

Yet the entire time, the author of the bill, Assemblyman Evan Low (San Jose) stood there smirking, I could tell he knew this bill would pass.

But the beautiful transformational power of the Lord was in that courtroom.
Over 35 people wore black t-shirts with the word “Changed”on the front.
The backs of their t-shirts said “#oncegay”

And unlike this bill…
These people exemplify hope, for they are no longer trapped. (Romans 5:5,6)
These people are a direct affront to the darkness of deception from the pits of hell. (1 Corinthians 6:9-11)
These people have been eternally set free by the blood of Jesus. (Romans 6:22)

What a powerful visible display of His glory to see once gay people stand without fear and declare they were no longer gay.
That is true hope.

Senator after Senator mentioned that their offices were bombarded with phone calls and emails opposing this bill. They have never seen anything like it.
But that Christian effort wasn’t enough to stop those same Senators from passing this bill. Or from passing any more like it in the future.

The only thing that will speak to elected officials is VOTES against their re-election.

The earth quaked yesterday with the pounding footsteps of soldiers for Jesus that marched up to that microphone.
We were all behind enemy lines. We saw their pride. We saw their power in action.
We saw their ability to push their agenda through.
But for the FIRST time, they saw US.

Yours in love, joy and hope,

If you have not yet signed our petition to stop this bill, you can sign it here.

If you need copies of the petition to distribute, click here.

P.S. – Pray for Evan Low, for his salvation and deliverance.